I'll be at the Red and White comic show in Calgary on September 14th, checkout the web page HERE.
I'll be selling Wolf Hands, *previously printed elsewhere and if all goes well Midnight Feature will finally make it's debut! Hope to see everyone there. 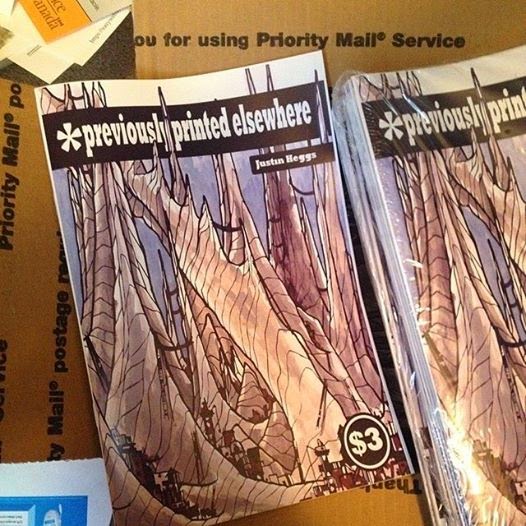 Posted by Justin Heggs at 20:49 No comments:

A Few months ago I realized I was running low on my copies of the anthologies that I had written stories for, The Calgary Expo was just around the corner, it seemed like a perfect time to put my own book together.

It's called *previously printed elsewhere, here's a nice review of it from Geek Stampede.

Despite coming home with money in my pocket, I *made* no money at the Calgary Expo this year. I did, however, get to hang around in the world of comics for four great days, sell books to old friends who came by to support, new friends who came back and bought more and everyone in between. There were people who'd never heard of the story, excited to read it and people who've read the story, excited to read more.

Calgary has the most fantastic, tight knit comics community, with a roster that's both incredibly impressive and amazingly welcoming. I made no money, sure, but I felt like a pro at the Expo and sat at the "grown up's" table at the bar afterwards, plus Mike Costa said he really liked Wolf Hands and bought me a beer, nothing wrong with that.
Posted by Justin Heggs at 21:13 No comments:

Wolf Hands only has a few more pages to go before the first story is over, crazy. The response has been fantastic too, for something coming out of nowhere from creators with no real name for ourselves, we've managed to get quite a few people to check out the story.

We've also had a nice write up from Geek Stampede,

and a nice interview with Comic Book Therapy. 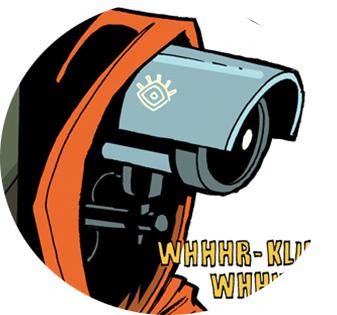 Posted by Justin Heggs at 19:04 No comments:

Please visit WOLF HANDS COMIC to see my latest project. Season one of Wolf Hands updates a new page every Sunday for 13 weeks.


After years of struggling to get various projects off the ground, it turns out nothing gets a project moving faster than a full moon.


The progress with the anthology continues to be slow, painfully slow. The cover is done now though, a fantastic piece by the amazing Riley Rossmo. 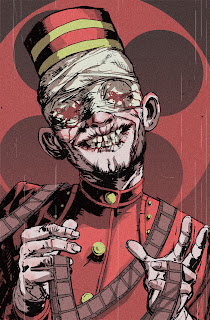 As that continues to build, the next project also pokes it's head out. A web comic with artist Nick Johnson, that we've had on a slow boil for a while, waiting for his schedule to clear itself up. Slow boil until a week ago when Nick emailed me telling me that June 23 was going to be what is known as the Supermoon, the closest the moon will be to earth this year. AKA the perfect time to launch a were-wolf comic. Not to mention that it is exactly 13 weeks away from the local Comic and Toy Expo, giving us just enough time to collect all 13 episodes of our first season in print for the show. A plan that couldn't be better if we actually planned it.


And so, from slow boil to full speed in a week, the flood gates have opened and the most exciting project I've worked on gets ready to say hi to the world.
Awesome.

Posted by Justin Heggs at 22:55 No comments:

Putting Together an Anthology

or, Nobody is as excited about your ideas as you are.


The latest thing I've been working on is a horror anthology. I liked putting Don't Be Afraid into an actual comic shop so much  that I decided I'd try to do a couple of issues over a year. The goal is to start in October and put out three issues over the year and a forth one next October. Four issues doesn't seem like too big a task and I've got plenty of lead time to deal with problems, I've even got a good story telling device that I'm happy with, let's do it! What's that? No one is sharing my vision here? Anyone...


Not that NOBODY cares, it's just a really tough sell. At this level the deal is basically If I ask you and you're interested, if you can find a way to get your story drawn by someone, you're in. Simple enough, but you also have to take into account that the writers I contact aren't illustrators and have to find someone to work on their stuff. Even if they get the most dirt-cheep page rates they can get, I'm still basically saying "hey guys, who wants to spend 300 dollars?".


The project is continuing to move forward, the final product ending up differently than I'd imagined it is still a possibility, we'll have to wait and see. My art is finished, at the worst I'll still have a ten page mini comic with my name on it.
Posted by Justin Heggs at 20:47 No comments:

Everything I have out has been published through: